This month we acknowledge and celebrate the birthday of a very brave young lady. Malala Yousafzai. I’m sure you remember the publicity that surrounded her when she was shot for attending school.

In Pakistan, the birth of a baby girl isn’t always applauded, but Malala’s father being a teacher was determined to give his daughter every opportunity to learn as if she were a boy. However, in 2008 the Taliban took full control of the village where they lived and it was ruled that no girl was to attend school.

Malala spoke out on behalf of girls and their rights to be educated. On her way home from school in October 2012 a masked gunman boarded her bus and shot her three times on the left side of her head. The gallant driver put his foot to the pedal and the gunman escaped.

Malala was in a very bad way and woke up 10 days later in a hospital in England. Here, with specialist surgery and rehab, she began to recover. And when she did, she became a fearless advocate.

With the help of her father, Ziauddin, Malala established the Malala Fund in 2013 – a charity dedicated giving girls an opportunity to achieve what she chooses for herself.

With more than 130 million girls not in school, the Malala Fund works to breakdown barriers that hold girls back. They aspire for a world where every girl can learn and lead, investing in education activists who drive solutions to barriers to girls’ education in their local communities. These education activists, like Malala and her father, represent a strong challenge to barriers and threats like poverty, war and gender discrimination made to these girls and advocate for programmatical solutions. The Malala Fund has a priority in regions of Afghanistan, Brazil, India, Lebanon, Nigeria, Pakistan and Turkey.

In recognition of this work, Malala received the Nobel Peace Prize in 2014 and became the youngest-ever Nobel laureate. She continues to fight for equality of education for all girls’ and she just completed a Philosophy, Politics and Economics degree at the University of Oxford. What an incredible achievement! 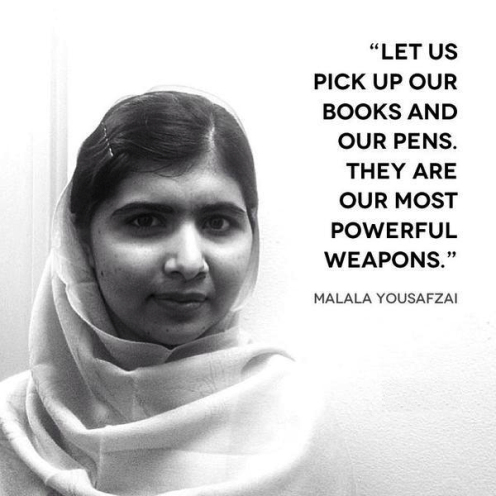 Malala’s birthday, July 12, has been marked by the United Nations as being a day to honour women and children’s rights around the world, and equal access to education.

This Thank You Thursday, we say a big Happy Birthday to Malala, and thank you for your incredible courage and determined advocacy work to change the plight of millions of women and girls around the world.