Next Tuesday, March 8th, is International Women’s Day. On this date, every year, people around the world celebrate the social, economic, cultural and political achievements of women. So, in honour of this occasion, today’s Thank You Thursday blog is going to celebrate an inspiring Tasmanian woman and the organisation she founded that supports young women across Australia.

Bernadette Black was 16 when she became pregnant with her son, Damien. Young and nervous, while she had the love of her family, she felt there wasn’t much outside support for her. That was in 1993. In 2006 she published a book called, Brave Little Bear, about her own experiences a pregnant teenager (and mother) to hopefully give hope to other young girls going through a similar situation. Then, in 2006, nominated by her now 16-years-old son, she won the Barnados Australian Mother of the Year.

In that same year she began the Brave Foundation in Hobart. The interest in her book had been overwhelming. It was soon in secondary schools and health clinics around the country; and requests for more books and advice streamed in. Bernadette realised there was a lack of centralised support for pregnant teenage girls and she felt inspired to do something. She had a vision of building up ‘the village of support and acceptance around every person facing teenage pregnancy and parenthood, ensuring a happy, healthy and skilled future is available for all‘.

Her vision has certainly become a reality, with the Brave Foundation expanding and late last year was launched as a national charity. Take a few moments to watch Bernadette tell her story and how she came to founding Brave Foundation: 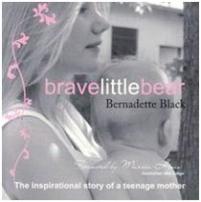 Their website has an interactive timeline for young expectant mothers to guide them through each week of their pregnancy, with practical advice and age-specific content such as talking with teachers at school. The website also provides other real life stories and encourages young girls to make three promises to themselves for life after the baby is born, as the Founder and CEO, Bernadette did. At the time of her pregnancy, and motivated by a teacher, she promised herself: 1) To be a good mum, 2) To finish her education, and 3) To write a pamphlet or book to help others. The Foundation also provides education scholarships so pregnant girls can complete secondary school without the financial burden.

This Thank You Thursday, we give a shout out to Bernadette and her incredible work with the Brave Foundation, helping so many young women be brave at a time when they often feel they cannot.